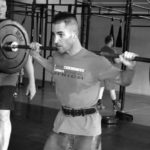 Owner and Head Coach of Fitness Technologies and CrossFit Platinum

Julian has been involved in the sporting arena since the early days of primary school. He made his way through school by competing in as many sports as possible.

During his high school years at Greenside High School, Johannesburg, Julian competed in the A-Team Swimming from 1990-1994 – Captaining the A Swimming Team during his matric year in 1994. He played Rugby from 1990-1994 in the A-Team of each age group and played First XV for 1993 & 1994, during which years he received Half Colours for Swimming and Rugby.

Other Industry Specific Seminars, Courses and Workshops include Olympic lifting, Kettlebells, and Martial Arts. Proudly including the SealFitComprehensive Academy, SealFit Kokoro Camp, and the Spartan Obstacle Specialist Qualifications. These all come together to create a holistic understanding of the body and a holistic way of training.

Julian is a qualified and experienced personal trainer and sports conditioning coach with more than twenty years’ experience in the health, fitness, sports and martial arts industries in various training, management, leadership and motivational roles.

He is a dedicated, enthusiastic and passionate individual who has single handedly shaped two young commercial enterprises.

As a CrossFitter, Julian competed in the 2010 Regional Games in South Africa, placing Fourth overall in the Country.

He placed 2nd at the Fittest in Cape Town Competition in 2011.

In 2013, Julian again qualified as an Individual but decided once again to join the Platinum Team. Team CrossFit Platinum won the 2013 Africa Regionals for the second consecutive year and, again, went on to represent the Africa Region at the 2013 Reebok CrossFit Games in Los Angeles in USA in July.

In 2015 Julian completed his first 70.3 Half Ironman in Durban. This was a precursor to the next challenge of travelling to Los Angeles, USA to complete the SealFit Comprehensive Academy and their ultimate Challenge of Kokoro Camp.

Julian is one of only Four South Africans (the only South African CrossFit Coach)to ever have completed the Kokoro Camp. (www.sealfit.com)

Julian is continuing with the Triathlon and Ironman racing as well as his competitive CrossFit career by participating in local and national CrossFit events, now competing in the Masters divisions. He is also using his knowledge of CrossFit and Training to prepare himself and other clients for various Endurance events, i.e.

Over and above all the training, Julian is actively involved in trying to bring CrossFit, Functional Training, Health & Wellness, and Nutritional understanding into the Schools using the CrossFit and CrossFit Kids methodologies.

For those that feel traditional CrossFit is too hectic for them.  In these classes you…

Our Foundations Class is a 4 session package that introduces you to the fundamentals of CrossFit. During…

The CrossFit prescription is performing “functional movements that are constantly varied at high intensity.” CrossFit is a core strength…